Time is for the Birds 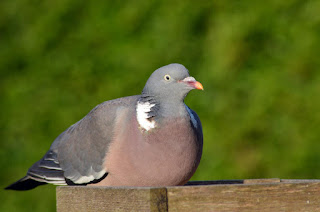 Pigeons are enormous here. There are the regular “park rat” variety pigeons seen everywhere. But here, there is the “Wood Pigeon” and it is huge…and repetitive.

According to the Merlin Bird ID app (free from Cornell University and really worth downloading) this bird is a “Distinctive, large bulky gray pigeon with a pale neck patch…Often rather unaware, and frequently crashes noisily and clumsily out of hedges and bushes. Display flight consists of a flap-flap-flap climb followed by a descending glide. Gives a low, throaty series of coos: ‘hrrruu-hoo-who-who.’” Repeatedly. All. Day. Long. As we approach the solstice, daylight here is from 5 am to 11 pm.

Clumsy and accident prone…I think wood pigeons are my spirit animal, but I am not fond of them. The French eat pigeons.

I wish they ate more of them.

They are slightly reminiscent of a whippoorwill which is common in Florida. We had one that lived outside our bedroom and would loudly repeat its “whippoorwill” all night long. This was pre-internet and reference books had no photos as it was rarely photographed at the time. (Photos were as elusive as Americans with French bank accounts.) I think it was a subversive way of ensuring no one shot them.

When we first arrived, we heard a neighbor’s cuckoo clock. Oddly, it was cuckooing at random times and seemed to go on forever. Turns out, we have actual cuckoo birds! Clockmakers have replicated the cuckoo’s song perfectly.

The French say that if you have a coin in your pocket the first time you hear a cuckoo in spring, you will be rich all year. They also informally greet each other with a happy, lilty “coucou” (coo-coo).

We live about 4 kilometres from Angers’ centre ville (2 miles from downtown Angers). On Sunday mornings we love to hear the cathedral bells chiming as they call worshippers to church. They ring slowly at first and then build to a joyous frenetic cacophony of sounds. I am sure this is to ensure no one oversleeps and forgets to attend church. No one needs an alarm clock on Sunday morning.

The French are predominantly Catholic, but mostly non-practicing except for honoring religious holidays of which there are many. (Pont l’ascension, Pentecost, Assumption to name a few.) These are referred to as jours fériés - bank holidays and they are only celebrated on the actual date, if it happens to fall on a Sunday that year, there is no Monday off to make up for it.

We began preparing for this journey nine months ago. Fitting, since we gave birth to a new life here in France. This week marked our one month anniversaire (birthday in French). Everything is new to us and we are like babes in the woods, not knowing how to do much, but people are taking excellent care of us and we are so thankful.

And best of all… 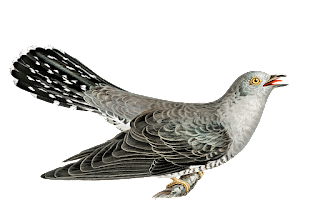 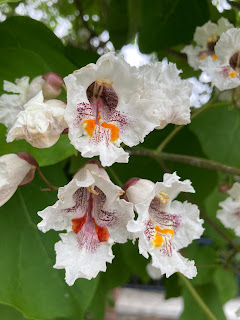 A chestnut tree by our bus stop. INCREDIBLY fragrant.
They make chestnut jam here…tastes a bit like a grainy Nutella. 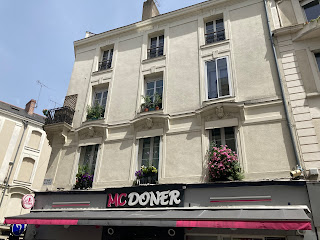 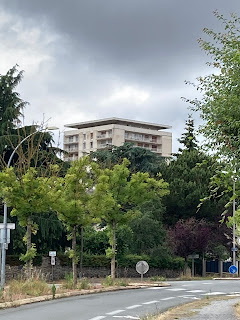 Salem has a REALLY ugly building, formerly Eldred, then ReMax
I guess the architect reused the plans here. 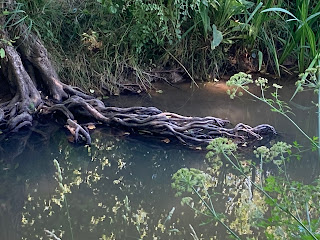 Love the roots on this tree. 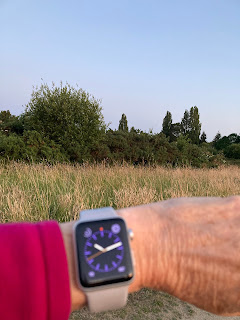 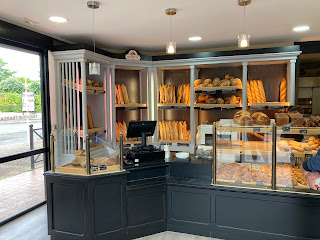 Our bakery…we know how to end a run! 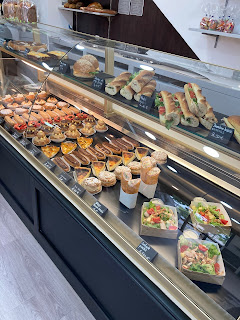 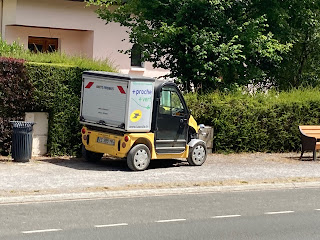 La Poste making a delivery.
Usually they are on bicycles.