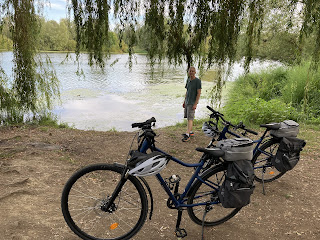 It seems the heatwaves are finished with us for the summer (unless September has a surprise wave) and we are finally able to enjoy the beauty of France. We dusted off the bikes and took an evening ride that brought us to tears.

But first, a recap…

August is the month where les vacances is most noticeable. Angers is not a preferred tourist area, even though we have a chateau, quality museums, and a botanical park to name a few attractions.

Many of the local residents left in August. The university students were gone. The parks were completely off-limits for a couple of weeks as the fire danger peaked. There were no cars on the roads or people on the sidewalks. The transit system switched to shorter, non-bendy buses in the summer, and even those were mostly empty. It seemed it was only us who remained while we awaited our OFII appointment which never came.

Mornings, we walked to the supermarché for groceries and many afternoons stayed inside to avoid peak heat, but we were diligently studying our French.

As August began to wind down, some activities picked up. Our English Library Coffee Group began to meet again. A little rain fell which enabled the parks to reopen. The evening temperatures dropped out of the 90s and we enjoyed dusky walks around the north end of the lake through the woods that returned us to our home. Only the sounds of birds to accompany us.

Last Sunday evening we rode our bikes to the river. I have never felt so safe riding a bike on the roads as I do here. Bike and walking paths are everywhere. We can ride from here to the ocean or back through the Loire Valley mostly on completely car-free paths. A quick ten minutes through the city and we joined the river path.

We pedaled along the water’s edge, between columns of trees that offered a canopy of shade so welcome during the summer heat.

I was reminded of a framed print in our Oregon bathroom of a scene almost exactly like this. Many nights I would brush my teeth staring at this photo marveling at its beauty, not knowing that one day it would be my new home.

We arrived at a people-powered ferry that crossed to an island accessible only to walkers and bikers. The first kilometer was populated with families with little ones, but after that, we were mostly alone surrounded by open fields of fragrant wildflowers and an indescribable peace.

I asked John, “Can you believe we live here?”

So we pedaled on, joyous tears streaming down our faces, laughing aloud at the relief and splendor of it all.

We made it to France. It is better than we ever dreamed it could be.

I appreciate the comments and emails you all send after receiving this. I wish Blogger had a better way of responding to comments. It is clunky. When I deduce who you are, I will respond via email. Also, MailChimp has stopped sending my updates so this may be the first update email you have received  in a while. Hopefully, the kinks have been worked out.

And now some photos and music…

On the bike path: 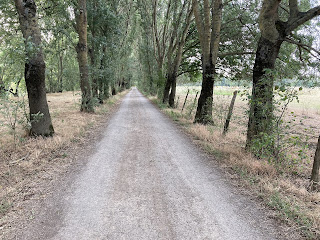 Crossing on the ferry 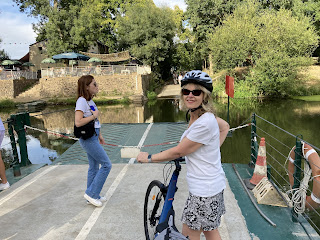 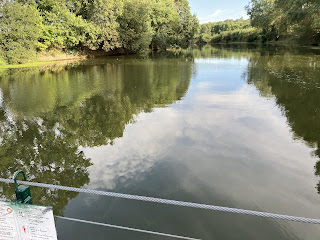 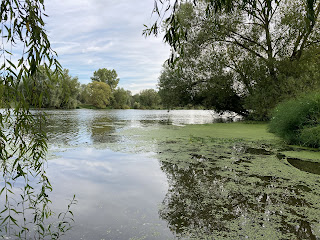 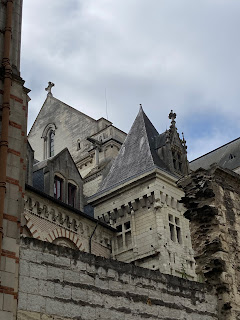 The back of the cathedral 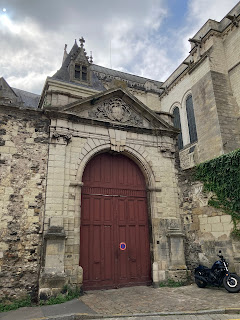 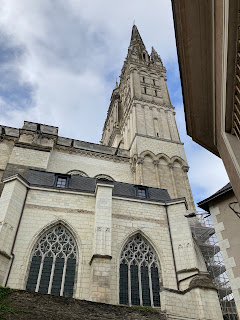 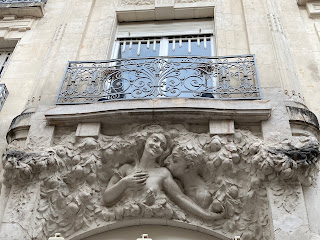 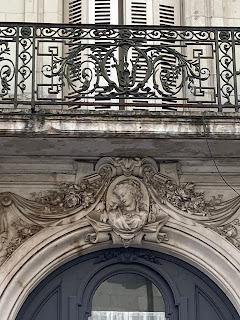 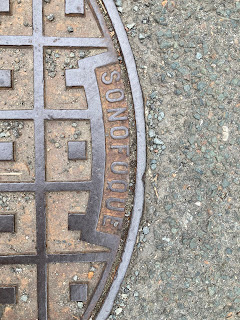 Angers is known for its slate. We love how it is used for a garden fence in this photo: 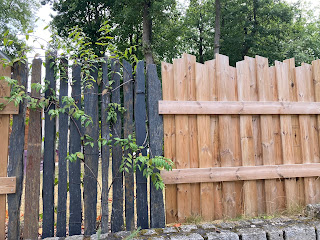 When the weekly marché comes to our neighborhood,
the power source comes up out of the sidewalk. Cool! 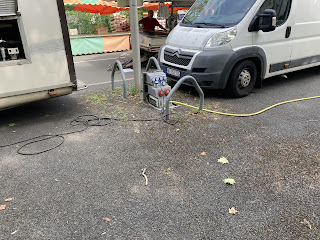 I love this tree. It looks like it is full of birds. 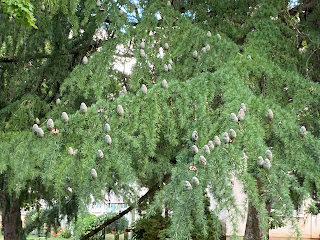 Coming out of the woods at the end of our evening walk: 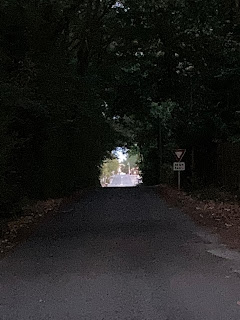 An example of the parched plants due to the heatwaves and drought. 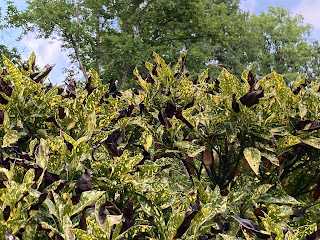 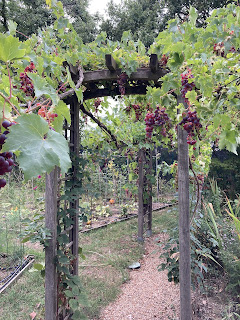 Tommy the tortoise is 50 years old.
She is a spur-thighed tortoise. 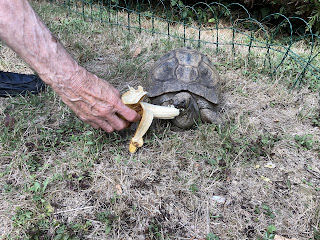 An insect house our friends P and G made in their garden.
I would live here! 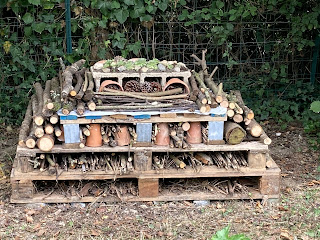 A beetle John spotted on one of our walks.
Oooh, shiny! 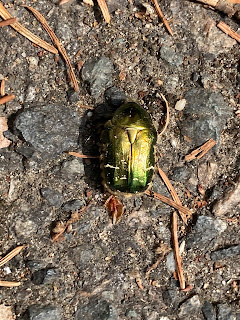 Our landlady, L, is always rescuing stray animals.
Last month it was a domestic white pigeon.
Today it was this cutie. 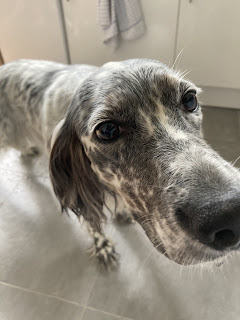 All watering of plants other than limited irrigation of vegetable gardens is forbidden.
Here, the city is bringing in tanks to fill from the area’s (now closed) fountains.
The water was used for plantings in public parks in an effort for them to survive until the rains begin. 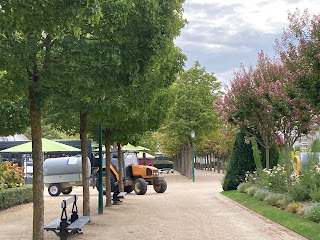 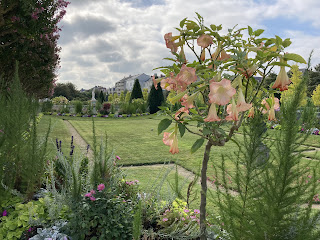 The heliotrope here is as big as my head, which is to say HUGE! 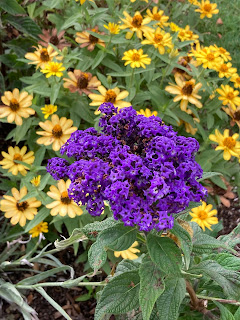 Houses are built out of concrete block or enormous brick blocks.. 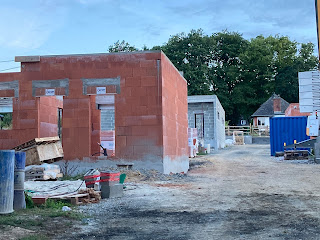 John streamed this while I was writing.

“Agnus Dei” a choral adaptation of

“Adagio for Strings” by Samuel Barber