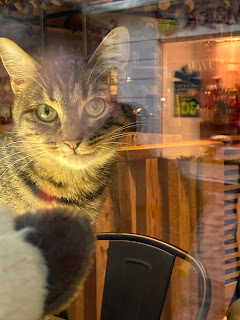 We found another cat café!

J’adore le pain. Pain is the French word for bread. Like most French words you only pronounce half the letters (pah, then add a nasal ng - like pong with a cold). Yesterday, we visited “La Maison du Pain” - the house of bread. We could find a new boulangerie (bakery) every day for months if we tried. Literally. Boulangeries are everywhere.

Are you familiar with a round loaf of bread? It is a “boule” because it is round, like a ball. Hence the word - boulangerie. We also have a fromagerie (cheese shop), poissonnerie (fish shop), pâtisserie (pastry shop - often combined with a boulangerie), boucherie (butcher shop)…you get the idea.

Boules are still popular, but they are a distant second to the baguette. I guess baguetterie doesn’t have the same ring to it.

In French, every noun (person, place or thing) must have a gendered article with it…le for masculine, la for feminine. So, looking at a baguette and its shape, one can assume naturally it is…..

This gender thing has no logic to it whatsoever. But I digress. Back to bread.

The stereotype of a French person with a baguette under the arm or in the bike basket is well deserved. In the late afternoon we see baguettes jutting out of shopping bags, backpacks, and yes, armpits.

When you purchase your baguette (typically for 1.40€) the ungloved clerk grabs the unwrapped baguette and either wraps the middle of it with a small, armpit-sized square of paper, or slips it into a bag that will only cover 2/3 of it. In the grocery store, these exposed loaves go sliding along the check-out’s conveyor belt, happily gathering whatever remnants of everything that was there before.

If the shopper heads to the bus, often the baguette is jostled by other riders, rests on the hand rails, or is occasionally dropped and retrieved as if nothing happened. As germaphobes, we have had to adapt and it has been a challenge.

Breakfasts are interesting. Most Americans think the French eat croissants every morning. Nope. This is a treat breakfast that may be reserved for weekends. Also, did you know that they dunk their croissants in coffee? Can you believe that this makes them even more delicious?! (The next time you buy a croissant, bring it home and heat it in the oven for about 5 minutes, to bring it to its fresh-baked goodness, then dunk away.)

The most common breakfast is tartine. Which is a toasted slab of baguette with demi-salted butter and jam (confiture). This is also dunked by some. I think it is a way of softening the crust of a very hard baguette, because dentists are hard to find. (Our US dentist told us he saw more gum damage and tooth breakage from bread over any other item!)

My friends with French husbands say that every meal must have bread. Pizza? Bread. Quiche? Bread. Bread? Bread. (John is now a French husband.)

Bread is served by placing the baguette directly on the dining table and diners rip of chunks as desired. Often, it works this way in restaurants also.

Friday and Saturday afternoons, it is not uncommon to see shoppers with 4 baguettes bundled in their arms in preparation for the weekend. Sundays are for the family and most businesses are closed. Each ville will have one boulangerie that will remain open, usually for the morning.

For many people, bread is pain thanks to gluten. Commercially processed, fast-acting yeast and a short rise may contribute to the problem.  Anecdotally, the bread in European countries does not seem to cause as many problems for people due to the varieties of wheat. It is also thought the slow rising process makes the gluten digestible somehow. Bread often is made with levain - a fermented starter.

Thank you to Debbie and Scott for suggesting I include daily life and customs and post more often. I was hesitant to send more frequent posts, but it seems folks are okay with it. You all are lovely!

Yesterday we got off the bus in centre-ville and heard the most beautiful music. It was someone in his apartment and the sound reverberated off the walls in the street. It was magical!

A shop was demonstrating their wares: 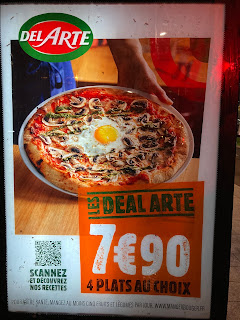 Egg on a pizza. Nope. 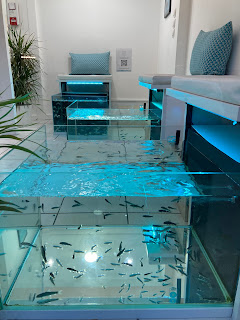 Fish pedicures. They eat the dead skin off your feet.
Nope. 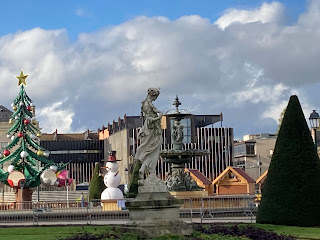 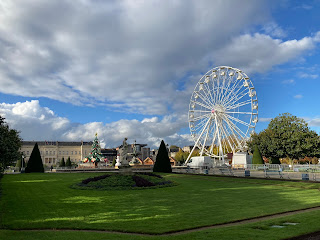 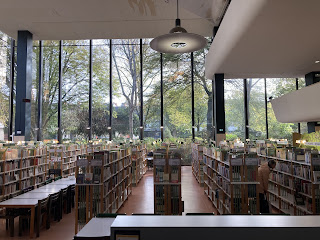 One of our many public libraries.
We sat here and studied French.
Can you believe the view? 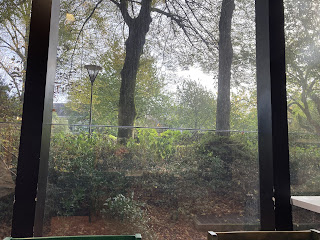 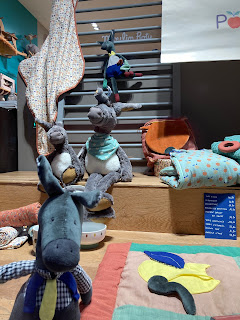 It seems donkeys are popular here. 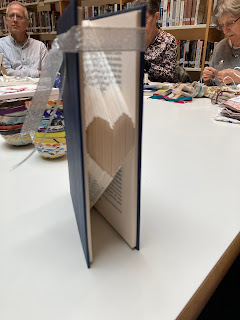 My craft contributions for the English Library Craft Sale. 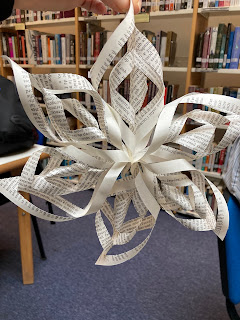