A Rose by Any Other Name…

We cannot begin to describe how much fun it is to travel and have the correct Covid test and timeframe. The US government changed the requirements on the day we were to test and we had to scramble.

It was going to be a leisurely test in Angers, three days before our flight. No, no! The rules changed and now we had to take our test within one day of the flight. This meant testing at Charles de Gaulle airport in Paris with thousands of other people. What confusion!

Fortunately I registered with the online French health scheduler, so we had a time to appear. Upon entering the airport we were greeted with the sounds of Frank Sinatra singing “New York New York”. Weird.

We showed up over an hour early at the airport test site for our appointment and barely made it in on time. When the number was called to get the brain poke, The system skipped over John’s number and kept going. Luckily I found the nicest person who was able to sneak him into a testing room and get it done.

I was required to give my birth (maiden) name. This is not on any of my travel documents or personal identification.  When our NEGATIVE test results were emailed to us, mine were delivered in my maiden name with no mention of my married name.  Crap.

Back to the airport again, this time to check with the Delta flight team to ensure they would take my test results when the name didn’t match any other travel documents. After being referred to three different people, we were assured I would be able to fly tomorrow. I still don’t feel totally confident.

We had a light lunch at the airport and debated whether to go into Paris to see the Eiffel Tower all lit up for Christmas. During this discussion a pigeon joined us in the cafe. The man at a table across from us kicked the pigeon and laughed, whereupon I yelled at him and called him an ass. He said it was just a pigeon and I said it doesn’t matter, you just don’t kick animals. His wife said he was afraid the pigeon was going to eat his food. The pigeon was on the floor his food was on the table.

At this point we determined we have had enough of people and decided to return to our room and call it a trip.

So, if Delta decides my documentation is good enough and I don’t get in a fight with another animal abuser at the airport, we should be on a plane home tomorrow.  :-)

Pigeons are people, too! 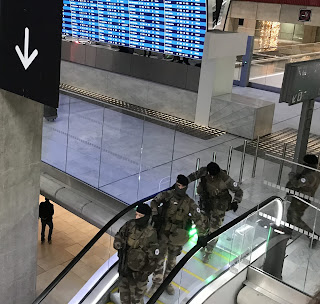 John managed to grab an image of a few of the armed soldiers. They walked by with their trigger fingers at the ready. They must’ve heard about an altercation between an animal rights person and an idiot in a café in the airport. :-) 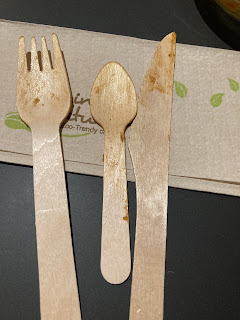 France has banned single use plastic and takeout cutlery is made of wood which is pretty cool.