🎶…this is the land of confusion…🎶

Welcome back to 1986, when Genesis had this number one hit. So many years later, the song still resonates and the title has become the soundtrack of our life at the moment. We. Are. Confused.

Vannes was supposed to be a base to explore surrounding areas. After a second day in Quimper, we were back in Vannes walking to the local grocery store took a wrong turn and came upon a port bordered on both sides with walking paths. When life presents a path…we must take it.

Saturday we walked for twelve miles along the shore of the gulf and at the edge of farmland. Absolutely gorgeous.

Sunday, we walked 8 miles along the trail on the other side of the port. It was even more beautiful. How could this be? The path meandered along the shore and through an area that was the clone of the San Juans in WA. It continued next to a pasture with a beautiful donkey, and concluded in a protected estuary filled with waterfowl.

We wandered through neighborhoods, desperately seeking for sale signs. Nothing.

We came back to our apartment and began searching for housing. Then reality set in. This is the off season and Vannes is a playground for northern France. It would very likely mirror the worst features of La Rochelle from April through October. The images from Google maps showed this to be true.

Supposedly Brittany is home to a large British expat community. We searched for something similar to the Bibliothèque Anglophone in Angers…nothing. We haven’t heard one single British accent either. It is very intimidating to make this leap with no community support.

I started looking at Halifax, Nova Scotia again. We speak the language, could drive a car, how bad could February be?

Our morning train to Dinan leaves at 8 am, we have to be up at 6. We fell into bed totally exhausted. It was all of 8:13.

To shut off our brains, we played NYT’s Spelling Bee. Nailed it. 8:45. Still too early. One more look at the SeLoger app for an apartment. Nothing. Try Angers again. What??!!! A 3/2 house overlooking the lake at Parc Saint Nicolas for €1200 a month! Vacant in January. I submitted a request to view on 11/21.

So now we are on the train to northern Brittany, waiting for a reply from the Angers immobilier (rental agent).

🎶…this is the land of confusion…🎶 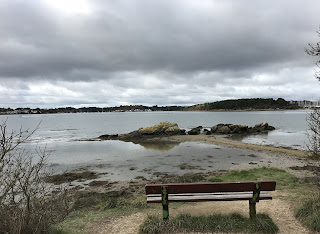 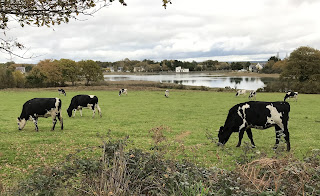 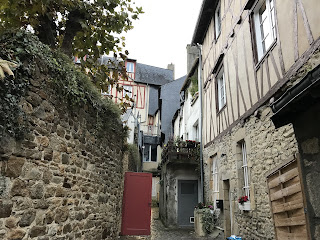 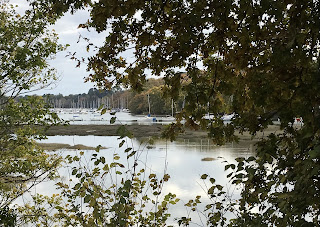 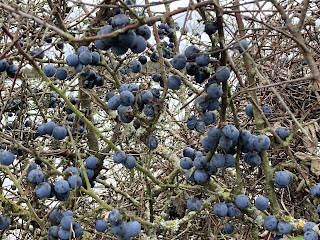 Okay, no foliage. They look like blueberries. Why doesn’t anyone pick them. I took a tiny bite and then chickened out. Spit, spit. 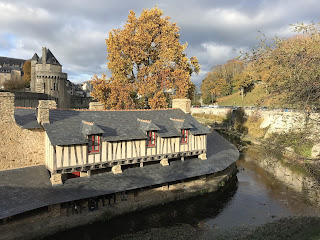 This is where the washer women worked hundreds of years ago. They would gossip about the people the worked for…thus airing their dirty laundry. Truly wealthy folks had laundry facilities on site to keep their privacy. 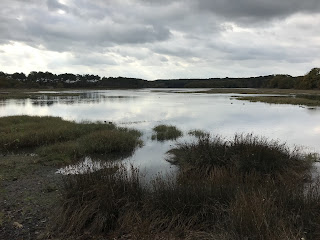 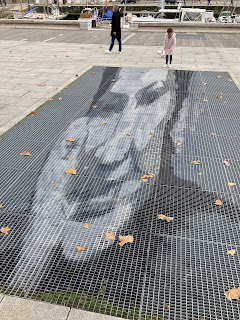 Forced perspective art. The lower you get, the better it looks. 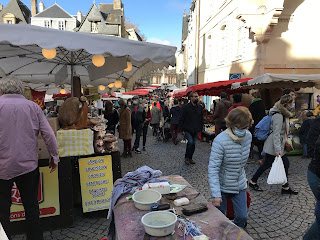 Market day. No thanks. SO crowded. 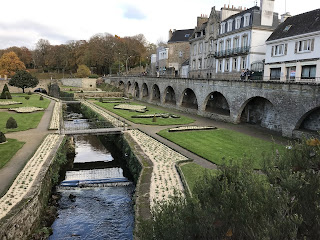 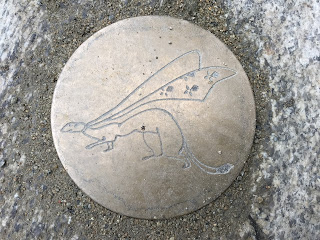 Look, on the ground, it’s a dragon, it’s a ferret, nope…it’s a caped ermine bearing the crest of Vannes. The cape is made of ermine fur. Just seems wrong. Kind of like giving a cow a leather vest. 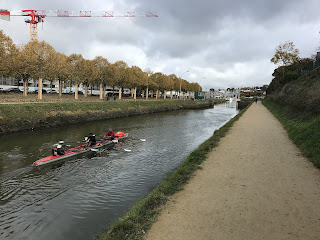 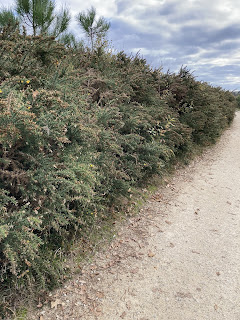 A hedgerow consisting mainly of gorse. Hedgerows are often mentioned in British literature. They are a thick fence bordering pastures. Gorse is a green plant with little yellow flowers. It looks soft, but it is the prickliest, spiniest thing I have ever felt. Ouch!