We have reached our halfway point and are ready for a break. Almost 200 miles walked!

Tomorrow, the rail workers go on a planned strike for the day and it is supposed to rain, so we plan to hang around the house which has four walls of sliding glass doors that look out on the most beautiful garden. So nice to be in someone else’s garden as it is easier to overlook any work that must be done!

We are in Dinan, which looks like the setting for Disney’s “Beauty and the Beast.” They were stringing Christmas lights and it is going to be magical.

Today we visited Saint Brieuc. (Pronounced Brie-eww…emphasis on eww) not the nicest French city. It looks like they are trying and in a few years it may be okay.

We met the nicest French English teacher at the public toilet. John pressed the green button to open the door, but nothing. Finally, this kind lady showed him that he was pressing the indicator light instead of the actual button.

We had the nicest discussion about teacher bladders and retirement. She also explained that you never hold the street bathroom door open for the next person as the sanitizer will engage and they will get wet feet. The door must close, sanitizing occurs, then the door unlocks and it is ready for the next person. Thank goodness it doesn’t sanitize from the ceiling!

Speaking of sanitizing…the French have so many different sanitation workers. The trains and stations are clean, the streets and parks have folks sweeping and even picking up cigarette butts…dog poop is another story.

Walking is especially challenging in the fall. Brown, curled leaves can perfectly camouflage dog poop. One either tries to avoid every leaf or assumes it is a leaf and gets a rude surprise. And some of those surprises are enormous.

Signing off until next time, when I will share my observations about noses, whether nosing their way into line ahead of you or hanging over a mask. Sigh. 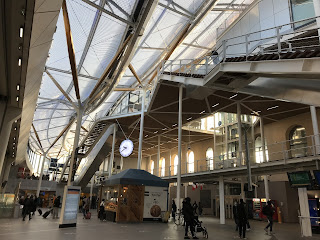 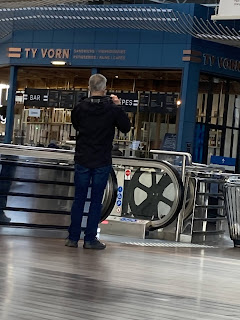 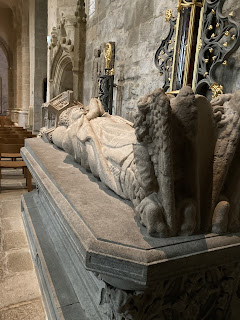 When I first saw the feet on this guy, I thought he was wearing clown shoes. Bunny slippers? Angel slippers! (I am waiting for my lightning bolt.) 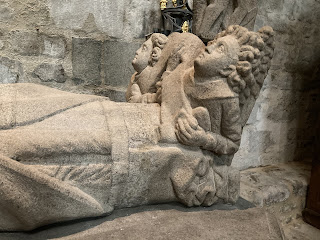 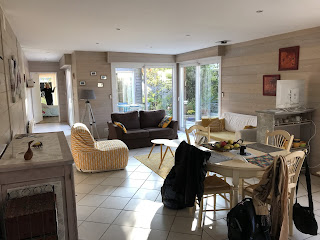 Our guest house in Dinan. About 80 feet long. The last place was in an attic and every step we took made loud creaking sounds. It is so nice to have a solid floor! 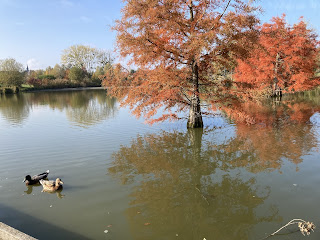 Waiting for a train. Gorgeous. 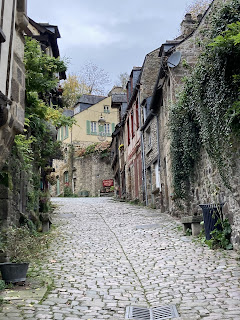 I cannot believe we have this place to ourselves. It must be an absolute zoo during a non-Covid summer. 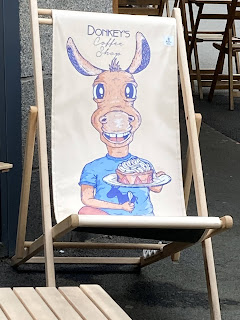 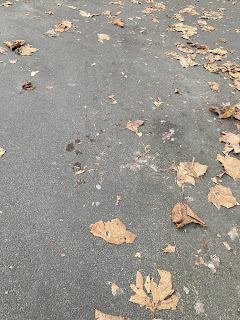 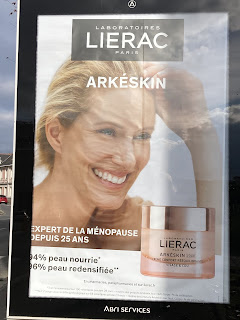 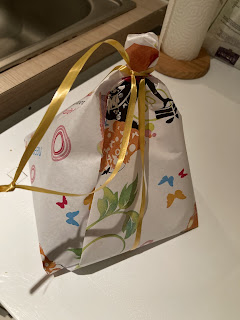 We stopped at a local Patissier and they wrap your purchases like a gift. She even gave us an extra piece of cake for free. Who does that? 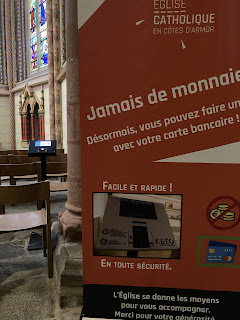 The Church does not want to miss out on funding. No change? No problem! You can tap your credit card and give however much you like. 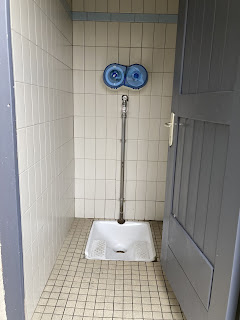